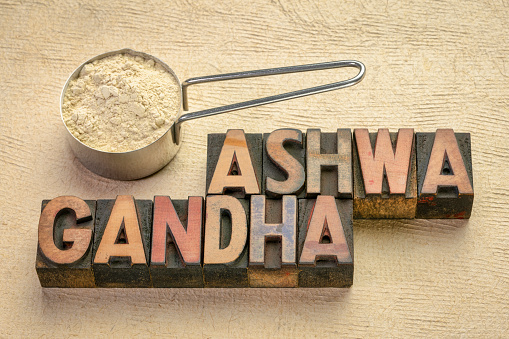 Ashwagandha is a medical plant which can offer several health benefits, such as improved blood sugar, reduced inflammation, improved mood, memory, stress, and anxiety, as well as a boost in muscle strength and fertility.

OUR ANALYSIS WAS CORROBORATED BY PEER-REVIEWED SCIENTIFIC PAPERS.

Ashwagandha (Originally called “Withania somnifera”) is actually a plant used in Ayurveda, which is an alternative medicine system that practices traditional medicine of India. The root of this plant has kind of a horsey smell (Since in Sanskrit, ashva means “horse” and gandha means “smell”). It is believed that it can give you the strength and virility of a horse. Various parts of this plant are used, but the extracts of its roots are the most common supplements. 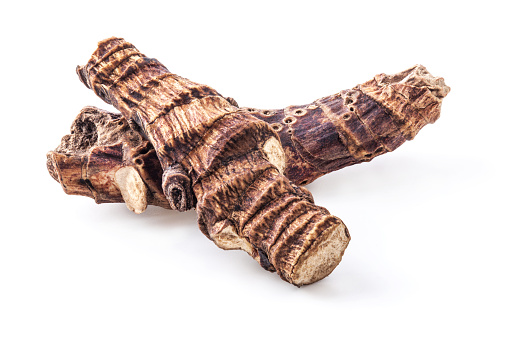 Aside from these uses, it has been traditionally used as an analgesic, astringent, antispasmodic, and immunostimulant. A study done by Modak M, “Indian herbs and herbal drugs used for the treatment of diabetes” has shown that it was also being used to treat inflammation, cancer, stress, fatigue, diabetes, and cardiovascular complications. Although, research has shown that the effects of this plant are stronger for people with stress-related insomnia, debility, and nervous exhaustion. Ashwagandha is also believed to be an immunostimulant compound, with particular emphasis on a stress-related suppression in immunity.

Ashwagandha is essentially a highly used medicinal plant in traditional Indian medicine. The reason behind this is a variety of ailments but usually focused on stress, immune support (with regards to stress), anxiety and depression (again in regards to stress), and the treatment of cancer and inflammation. Over time, it boasts low toxicity when it’s consumed as the root extract alongside food.

What Are The Benefits of Ashwagandha?

Due to the poor quality of clinical research, ashwagandha benefits have not been proven yet. The root powder has been used for centuries in India, in Ayurvedic medicine, but there is no high-quality evidence of its benefits.

Traditional Ayurvedic medicine offers several benefits that include the following.

There are numerous studies that claim that this herb has anxiolytic (anti-anxiety) effects. Scientists support the beneficial effect that ashwagandha has on anxiety and they also claim that it can help in reducing cortisol levels. However, the optimal dose of this herb is still not known, and more research is needed before people have complete confidence in it. Ashwagandha has also been reported to help in reducing insomnia, fatigue, and the symptoms of depression, but it still hasn’t been researched thoroughly enough for these purposes.

Some confer that it can increase the power output in untrained subjects during resistance exercise and anaerobic running. However, this observation isn’t based on a huge amount of research. It might also lead to some small changes in blood glucose, blood pressure, and LDL-cholesterol, while at the same time increasing HDL-cholesterol. Also, it is believed that it can lead to an increase in testosterone and sperm quality in infertile men.

Ashwagandha is in its core an ancient medicinal herb with multiple health benefits. It can help reduce anxiety and stress, help fight depression, boost fertility and testosterone in men, and even boost brain function. Supplementing with ashwagandha could be an easy and effective way to improve your health and quality of life because of all of its beneficial effects.

What Are The Side Effects And Drawbacks of Ashwagandha?

Although this herb seems to be safe, it needs additional research that’s specifically designed to test its safety. Some people have had side effects of mild drowsiness and sedation. People who have taken larger doses of ashwagandha reported that it caused vomiting, diarrhea, and stomach problems. The side effects of the herb are different from one person to another, and it is advised to talk to your healthcare provider or doctor before you decide to take it.

As ashwagandha causes the immune system to become more active, it could increase the symptoms of auto-immune diseases. In some people, ashwagandha can irritate the gastrointestinal tract. It is also advised to stop taking ashwagandha for at least two weeks before and after surgery as it may slow down the central nervous system.

Large doses of ashwagandha could potentially cause stomach problems, diarrhea, and vomiting. Rarely, liver problems may occur. There still isn’t enough reliable information to know if ashwagandha is safe or what the side effects might be.

How Often Can You Take Ashwagandha?

This question doesn’t have a simple answer because researchers are currently lacking a lot of long-term information from clinical trials.

Because of the potential drug-like effects it can have on neurotransmission, it’s not easy to dismiss some unintended side-effects or a loss of potency over a longer period of time. On the other side, the studies that have been done so far generally suggest that the effects that Ashwagandha has on stress, anxiety, and depression continually improve for at least two months after the beginning of daily supplementation.

Also, the studies use Ashwagandha daily, and if a study stumbles upon some effect, the best way to get that same effect is to use that same dose and dosing schedule in the study. It’s still a mystery if taking breaks from Ashwagandha or taking it every other day will have the same result.

Although Ashwagandha is a safe supplement for most people, its long-term effects are unknown. With this said, certain individuals should not take it daily, such as pregnant and breastfeeding women as well as people with autoimmune diseases, such as lupus, rheumatoid arthritis, type 1 diabetes, and Hashimoto’s disease.

How to Take Ashwagandha? 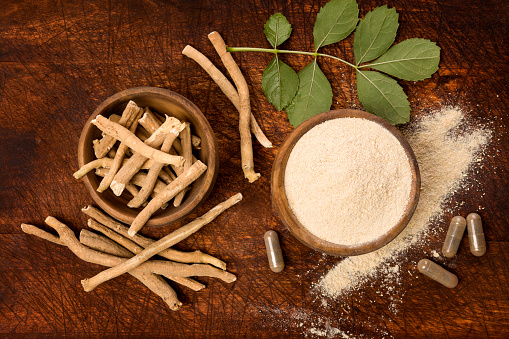 The safest way so far to take it is 300–500 mg of a root extract with meals (with breakfast if you take it all at once). Further research is needed to understand if higher doses can lead to additional benefits. Lower doses (from 50–100 mg) have been shown to be helpful in some situations, such as reducing stress-induced immunosuppression and enhancing the effect of other anxiolytic agents.

Ashwagandha is available on the market in the form of roots, tablets, and powder.

Although the  tablets are consumed easily like any other tablet, ashwagandha powder and roots need to be added into your daily diet. Traditionally, this medicine is taken in its powdered form, mixed in honey or ghee. But here are some other ways you can consume ashwagandha powder.

Try roasting an ounce of Ashwagandha powder in ghee and mix it with a tablespoon of date sugar. Eat this at least 20 minutes before breakfast, or later during the day with a cup of milk.

Ashwagandha powder with ghee, sugar, and honey is a delicious form of aphrodisiac effectively used in erectile dysfunction for men.

Dosages vary depending on your needs, but 250–500 mg per day for at least one month seems to have shown the most positive effects. 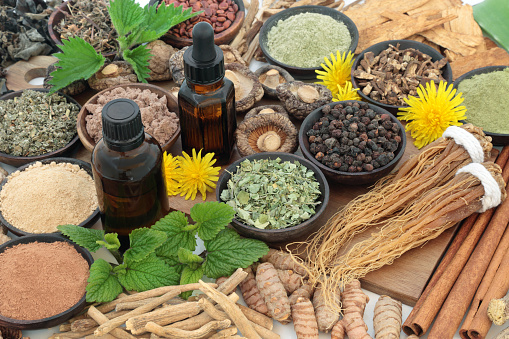 These claims summarize most of the human studies to tell you what effects this herb has on your body, how much evidence there is, and how strong these effects can be.

Can Ashwagandha Help With Anxiety?

Researchers have found evidence that suggests that this plant has potent anxiolytic effects in the context of chronic stress and anxiety disorder, with lesser potency in standard forms of anxiety that isn’t related to stress. Considering that Ashwagandha is similar to other anxiolytics there may be even more benefits when it comes to social anxiety. In order to get the accurate estimate of how effective Ashwagandha is and the optimal dose we need more thorough and high-quality research done on it.

When it comes to the decrease in cortisol, it is noted that humans had reached 14.5-27.9% than otherwise healthy but stressed humans. This is a much larger number than many other supplements have registered.

Can Ashwagandha Help With Stress?

Ashwagandha has shown to have a great effect on reducing the symptoms of stress. Also, it can even help with its comorbidities (fatigue, temporary cognitive impairment, etc.) as well as biomarkers such as cortisol.

Can Ashwagandha Help With Cholesterol

When talking about cholesterol, Ashwagandha has shown that there is a decrease in total cholesterol of around 10% when it is ingested (water extract of the roots). This is interesting because this appears to occur in all people regardless of whether they have a problem have high cholesterol or not.

Can Ashwagandha Help With Dry Mouth?

One industry-funded study, which needs to be replicated, has found that there is a notable reduction in anxiety-associated dry mouth problems.

Can Ashwagandha Help With Heart Palpitations?

Some industry-funded study, that needs to be replicated, has found that Ashwagandha can have beneficial effects on anxiety-associated palpitations.

Can Ashwagandha Help With Symptoms of OCD?

A reduction in symptoms of OCD has been shown in one study, but it needs to be replicated.

Can Ashwagandha Help With Symptoms of Osteoarthritis?

One study has shown that people with knee joint pain, that took both 250 and 500 mg of a standardized extract (10% withanolide glycosides minimum) seemed to have reduced the pain, enhanced the physical function, stiffness, and swelling notably. The effects with the 500 mg have shown even more promise. Although these are some good results, much more research is needed.

Can Ashwagandha Help With Thyroid-Stimulating Hormone?

There was one study where patients with subclinical hypothyroidism took 600 mg of a standardized extract (5% withanolides) for 8 weeks straight. The results were very promising as there was a notable reduction. However, much more research is needed.

Can Ashwagandha Boost Your Testosterone?

Testosterone has been shown to have an increase in infertile men (men who have a reduction in testosterone) and men who are regularly active with strength training. However, there is currently no evidence that taking ashwagandha can lead to inherent testosterone boosting effect in otherwise normal men with normal testosterone levels.

Can Ashwagandha Improve The Overall Quality Of Life

One study has shown that in healthy, active adults, quality of life on the WHO-QOL scale was improved when it comes to physical function, psychological health, social relationships, and environmental factors.

Since ashwagandha is a medical plant it can offer several health benefits, such as improved blood sugar, inflammation, mood, memory, stress, and anxiety, as well as a boost in muscle strength and fertility.

Ashwagandha and Ayurvedic medicine still remain somewhat of a mystery to modern science. Many of the studies so far have been too small, done only on animals, or had some flaws in their design. For this reason, researchers can’t say with certainty that it’s an effective treatment. But they can’t ignore the benefits, either.

We hope this article has explained effectively what ashwagandha is, what the benefits of it are, and what could be the possible side effects. Although it has not been completely tested and researched, there are benefits that seem to come from it.

It’s important to remember that you shouldn’t use ashwagandha to replace any medical treatments recommended by your doctor. If you do choose to use the herb as part of your treatment plan, make sure to first discuss it with your doctor.