Erythritol is currently one of the most popular natural sweeteners available, and its popularity is due to it having zero calories. How healthy is this substance actually?

Compared to aspartame, it seems far less problematic. It isn’t strange that a large number of people are buying erythritol hoping to decrease the amount of sugar and calories they consume daily.

Erythritol is commonly found in products such as low-sugar, sugar-free, or no-carb foods, and while it is considered to be safe, there are a few side effects that may occur. If it is consumed in large amounts, erythritol could potentially cause unwanted reactions like nausea or stomach ache. 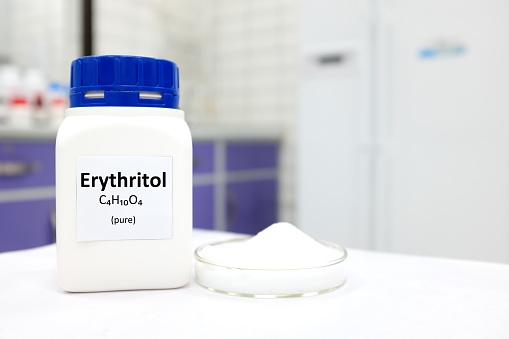 Erythritol is essentially natural sugar alcohol. In the small intestine it is absorbed rapidly, but badly metabolized. Because of this, it might not lead to health benefits like other natural sweeteners like yacon syrup or raw honey.

In 1848 a Scottish chemist John Stenhouse discovered erythritol, and Japan has been using it since the 1990s in candies, jellies, chocolates, yogurts, and various beverages. Its popularity in the USA started only recently.

As of 1997, erythritol is considered generally safe by the FDA. Customers seem to enjoy this substance because it has a similar taste to sugar, but it’s non-caloric and doesn’t elevate blood sugar levels. 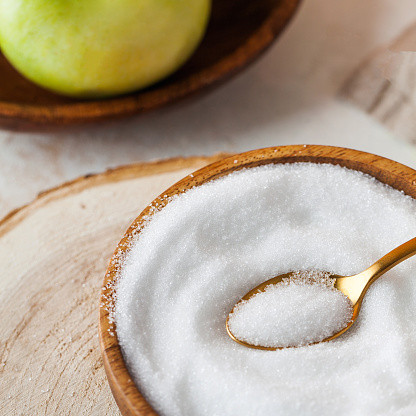 Sugar alcohols are regarded as carbohydrates that are similar to both sugars and alcohols when it comes to chemical characteristics.
To clarify, even though a sweetener doesn’t have calories and it doesn’t disturb blood sugar, it doesn’t automatically suggest that it’s good for your health.

“Sugar alcohols” don’t contain ethanol (alcohol) as alcoholic beverages do. Sugar alcohols include sorbitol, lactitol, isomalt, maltitol, mannitol, glycerin, and xylitol.
When this substance enters your body, it’s absorbed quickly in the small intestine with about 10 percent accessing the colon and the other 90 percent is egested in the urine. It goes through your system intact with no metabolization.

Erythritol can be found in fruits like watermelon, pear, and grapes. Mushrooms and some fermented foods such as cheese, wine, beer, and sake also contain minimal amounts of it.

Today, this substance is added to many packaged foods, snacks, and beverages. Some examples are: zero-calorie diet sodas and drinks, sports drinks, sugar-free gums and mints, chocolate bars, frostings, dairy desserts, grain-based desserts (cakes and cookies), and even some medications contain it.

It is most commonly combined with artificial sweeteners to give the product a better taste. Aside from providing a sweet taste, sugar alcohols add bulk and texture, retain moisture, and help prevent browning.

How is Erythritol Made? 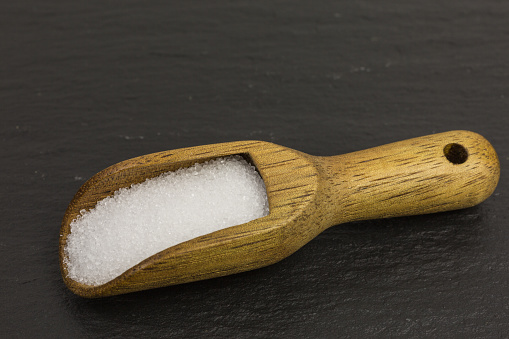 As we have mentioned, erythritol sometimes naturally occurs in fruits and fermented foods. However, most of the erythritol that is used in today’s products is made by taking glucose and fermenting it with a fungus called Moniliella pollinis.

Erythritol that is contained in food and beverages today is usually man-made from GMO cornstarch, producing an ultra-processed food that has nothing to do with a natural sweetener. It’s considered as an “invisible GMO ingredient.”

Erythritol can usually be found on the market as either a granulated or powdered natural zero-calorie sweetener. Some products that contain it in this way are Zsweet and Swerve.
Powdered erythritol is often used like powdered sugar and has no bitter or chemical aftertaste.
If you decide to buy organic erythritol, it ensures that the product wasn’t made from a GMO source.

Sugar alcohols normally go through your body untouched, as dietary fibers do. This is the reason abdominal gas, bloating, and diarrhea isn’t uncommon in some people. This is due to the incomplete absorption by the body and the fermentation by bacteria in the large intestine.
When consumed in larger doses, erythritol can allure water from the intestinal wall and cause diarrhea in individuals.

When consumption is more than 50 grams per day, digestive upset such as gas, cramping, bloating, stomachaches and diarrhea are even more likely to occur.

Not Recommended for Pets

Erythritol shouldn’t be given to dogs since it can lead to severe negative reactions. Small amounts of sugar alcohols are enough to cause low blood sugar, seizures, liver failure, or even death in your pets.
Symptoms of poisoning quickly develop after consuming sugar alcohols, typically within 15–30 minutes after consumption.

Could Help with Weight Loss

People who enjoy this sweetener mainly love it due to the fact it has zero calories. This is also the reason a lot of people use it for weight management and weight loss.
Erythritol is also convenient for diabetics and people who are on the keto diet and other low-carb diets. Replacing sugar with erythritol on a keto diet can help keep your carbs in check and lead to a longer state of ketosis.

There have been a few studies that have shown how erythritol could influence the release of certain hormones in the gut and help slow stomach emptying.
It is also used as a sweetener of choice by many people since it doesn’t cause a blood sugar spike, and this can be especially useful for diabetics.

Overall, this substance seems to be the ideal sweetener. It contains almost zero calories, it doesn’t raise blood sugar and insulin levels, and studies have shown very few side effects, mainly digestive issues in some individuals. People who are health-conscious may opt for sweetening their food with stevia or honey.
However, honey contains more calories and fructose, and some individuals don’t like the aftertaste that occurs after using stevia.
Before you choose to use erythritol, make sure to consult with your doctor or healthcare provider.